In the past 100 years, the British public have developed a love-hate relationship with concrete.

We say “concrete monstrosity” to describe an unpleasant, soulless place; and “concrete jungle” to describe a stressful, grey cityscape with no fresh air or green spaces.

Doesn’t sound exciting, does it? But concrete has already come to our nation’s aid twice in the last century, firstly during the 1930s housing shortage and the resulting Brutalist movement; followed by New Town construction and post-war prefab homes in the 1950s. Today we’re seeing many architects and homeowners taking a fresh look at the benefits of building homes with concrete, to fit today’s lifestyles.

In a recent study, HomeProtect analysed data from home insurance quotes given on the HomeProtect website to see who lives in concrete homes today and where those homes are.

You might assume that most concrete homes would be found in the New Towns, such as Northampton and Basildon.

Certainly, there are more concrete construction homes in New Towns than in non-New Towns. But analysis of HomeProtect data reveals a surprising fact. It’s actually Britain’s largest cities and not the New Towns that have the most concrete homes. 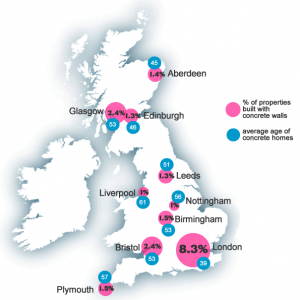 As the map shows, the country’s largest cities: London, Glasgow and Birmingham are in the top 4 spots for percentage of concrete homes.

Bristol, only the 9th largest city, was the odd one out in the top 4. Bristol suffered widespread bombing in 1940, many new homes were needed quickly afterwards. These were built using the Government’s post-war concrete home plans.

How large are concrete homes?

As expected, the London concrete homes are smaller, with an average of 2.1 bedrooms, a rebuild cost of nearly £300,000 and an average construction year of 1978.

In London, there’s a mixture of modern architecturally designed larger homes and a much smaller proportion of post-war homes.

The concrete homes in Bristol, Glasgow and Birmingham are larger with 2.5 bedrooms and a typical construction year of 1964 and a rebuild cost of approximately £180,000.

These cities house more of the post-war regeneration homes and a smaller proportion of modern grand designs than London.

Through the keyhole of the HomeProtect data, we glimpse the varying demographics of the concrete homes dweller today.

One typical concrete home dweller is a single tenant in Glasgow in their 20s, living in a 1970s flat with 2.1 bedrooms and they have £22,000 worth of belongings.

The other most common group of people living in concrete homes is a married homeowner in their 50s, living in the warmer climate of Cornwall, in a 1950s detached bungalow with 3.3 bedrooms and they have £47,000 worth of belongings.

Concrete to the rescue

Some of these house designs used prefabricated reinforced concrete panels for the walls, such as the Cornish, Airey and Reema.

These homes were put up in the recently-designated New Towns, such as Stevenage in Hertfordshire and Harlow in Essex, as well as in rebuilt war-torn areas.

As well as advancements in technology, a new wave of exciting home building and home extension TV shows, such as Grand Designs, which started in 1999; reflected a second wave of concrete popularity amongst architects and ambitious home owners.

With the lack of affordable housing in many areas, especially in the South, we wonder if concrete is going to rescue us again.

Could it be the perfect material suited to building the additional 140,000 homes needed to meet demand by 2020?

So, will concrete be the future of homes?

Innovations being worked on to produce more energy-efficient and eco-friendly concrete will give the material a boost in popularity amongst home builders.

Other developments that researchers are working on include the ability for the material to self-heal using bacteria which secrete limestone to re-seal any gaps – now that’s clever! There’s also a self-cleaning concrete which is infused with titanium dioxide that dissolves smoggy air and keeps the surface sparkling white.

Given all the evidence we’ve seen, two questions still remain:

Could these innovations coupled with the cheaper building cost of concrete homes result in concrete being the answer to the nation’s urgent need for more homes in the next few years?

And, will the nation fall in love with concrete again?

Our answer: Yes and yes.

HomeProtect specialises in providing home insurance to homeowners and tenants that may have found it difficult to get cover elsewhere. Unlike other insurance companies, we can offer a quote online in 97% of cases. We make it easier for everyone, but particularly those with an unusual property or living circumstances, to get an online quote for affordable cover.

HomeProtect is a trading name of Avantia Insurance Limited, an independently owned insurance intermediary, regulated by the Financial Conduct Authority. The insurance policies they provide to customers are underwritten by AXA Insurance and Ageas.

26th May 2020
We use cookies to ensure that we give you the best experience on our website. Learn moreOk