The much-anticipated next phase of homes at Wapping Wharf will officially launch next week (Monday 2nd September), with potential buyers offered the chance to look around a new show apartment.

Wapping Wharf is an award-winning, much-loved new neighbourhood on Bristol’s harbourside, already home to an established community of residents and independent shops, restaurants, cafes and other businesses.

A new show apartment[1] complete with kitchen and bathroom on the first floor will give potential buyers an idea of how their new home could look. The ground floor will be home to the marketing suite for buyers to meet with the sales team and find out more about what life living at Wapping Wharf would be like.

Located on Museum Street at Wapping Wharf, the show home and marketing suite are housed in converted shipping containers, similarly to CARGO, a hub home to many of the quarter’s eateries, shops and businesses.

An initial 26 homes were snapped up in spring, subject to contract, following an initial release to those who already live at Wapping Wharf or were pre-registered. From Tuesday 27th August, those who were pre-registered had an ‘early bird’ opportunity to buy a home as parted of an additional limited release. From Monday, September 2nd, the public sales launch will kick off, with prices starting from £255,000 for a one-bed apartment.

Pauline Sangster, senior residential sales & marketing manager at Wapping Wharf Living, says: “It’s been wonderful to see such a great response to the new homes being created at Wapping Wharf. They have so far had broad appeal across the demographic, from young to older, with many snapped up by residents living in the first phase, demonstrating the popularity of this well-loved, established community.”

In keeping with the historic dockside location and the phase one design, the new development has the same industrial wharf-like character.  Many apartments have balconies overlooking the new street scenes or internal garden courtyards. Airy vaulted ceilings and terraces feature in many of the top floor apartments.

Sales agents Savills and Atwell Martin are marketing the homes for sale.

George Cardale, head of Savills residential development sales in Bristol, said: “It is testament to the exceptional design and fantastic location that the next phase of homes at Wapping Wharf has proved a considerable success – even before they have been publicly launched for sale. We are delighted to market this great development and fully showcase the quality of living on offer at what is fast-becoming one of Bristol’s most vibrant and best-loved communities.”

Sue Dyer, partner at Atwell Martin, who has been involved in marketing both phases of homes says: “Nearly all the buyers so far have been from Bristol which shows just how much the city has taken this new area to heart.  Many of the first homes to be released have been sold to people who have been waiting patiently for an opportunity to buy here for quite some time and we have had some very excited homeowners.”

Wapping Wharf is right in the heart of the city.  Located next to the harbour and M-Shed with the Arnolfini, Watershed and Bristol Old Vic all within walking distance, it is part of Bristol’s cultural and leisure hub.  The CARGO development of shops and eateries located in converted shipping containers continues to flourish, growing the area’s reputation as the place to go to find exciting restauranteurs and unique emerging independents.

Wapping Wharf Living is a joint venture between developers Umberslade and Muse who have secured £23.4 million funding from Homes England towards phase two. The support comes from Homes England’s Home Building Fund, which provides loans to help unlock or accelerate the delivery of residential and mixed-use housing developments.

Of the 256 homes currently being built at Wapping Wharf, 93 will be sold to Sovereign Housing Association, 49 of which will be shared ownership housing and the remainder for private rent, with the rest for private sale. After completion of these first 256 new homes, a further 81 affordable homes will be constructed separately as part of phase two. 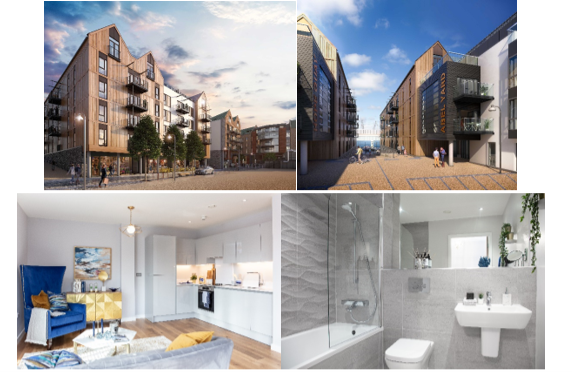 2nd June 2020
We use cookies to ensure that we give you the best experience on our website. Learn moreOk