With new research highlighting that two fifths of Scottish non-homeowners do not believe that they will ever be able to own their own home, the home building industry warned that the aspirations of many individuals and families across the country were being stifled.
Following publication of the Bank of Scotland statistics, trade body Homes for Scotland (HFS) pointed to official Scottish Government data showing that the majority of those living here desired to own their own home.
As the building of new homes remains 40 per cent down on 2007 levels, HFS Chief Executive Nicola Barclay emphasised the industry was doing all it could to step up production but that more government action was needed to ensure that Scotland’s housing meets the diverse needs of all those living here and said:
“Whilst it is encouraging that the Bank of Scotland report reveals that younger generations are more optimistic about buying a home, the reality of the situation is that affordability continues to impact on this most fundamental of ambitions.  It is therefore crucial that we see a significant increase in the production of all-tenure home building.  This is the only way to tackle house price inflation and would also alleviate pressure on other sectors. 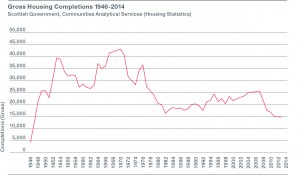 Barclay’s comments also followed the launch in England of the “Redfern review into the decline of home ownership”.  With Scotland experiencing a six per cent fall between 2009 and 2014, she attributed this to the dramatic decline in home building and the difficulties many people have encountered in getting large mortgage deposits together and added:
“That is why we are calling on the next Scottish Government to manage a return to pre-recession levels of home building which would mean at least 100,000 new homes by the end of the next parliamentary term.  With details of the next phase of the successful Help to Buy (Scotland) shared equity initiative recently announced, we are hopeful that this could go some way to helping achieve this target and enable more Scots to take steps onto and up the housing ladder. However, the impact of criteria changes and reduced funding for the successor scheme remains to be seen.”

27th May 2020
We use cookies to ensure that we give you the best experience on our website. Learn moreOk