National research carried out by CensusWide has revealed that mould was by far the least appealing factor for people viewing a home.

44 per cent of people said they would be put off buying or renting a house if they noticed on a viewing that it had mould. 96 per cent said they would rate mould in a home they were looking to buy or rent as bad or extremely bad. Mould was ranked far higher than the next worst factor, which was animal smells – at 32 per cent and garish decoration – at 13 per cent. The research also revealed that one in three people said they suffered with mould in their home but were not aware of how to permanently solve it.

Peter Haynes, Product Manager at EnviroVent, said: “This is enlightening reading for anyone who is looking to sell or rent out a property and it highlights a problem that many people still do not understand the link between damp and poor indoor air quality or realise how important it is to have effective ventilation in the home. Although sellers may wipe away the mould, there is no hiding the fusty smell as soon as a prospective buyers walk through the door – and with conventional treatments the mould will soon be back! What’s also interesting is that people are less prepared to put up with condensation and mould than ever before.” 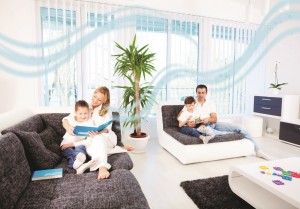 The survey also revealed a startling statistic that 13 per cent of people nationally would rather move out than deal with issues with mould in their home. This was highest in the 16 to 24 age group at 21%, who are mostly renters and therefore this research is interesting to landlords too and lowest in the 55+ age group at 9 per cent. Sheffielders were more likely to move out of their home than any other city if they experienced issues with mould – with 25 per cent saying they would do so.

With national government studies showing that only eight per cent of homes have any form of effective mechanical ventilation system, this shows what a huge national problem we have in recognising and responding to poor indoor air quality. Out of those surveyed, 32 per cent of people admitted they did have an issue with mould growth in their home.

Many homeowners and landlords are finding that Positive Input Ventilation offers an effective solution to the problem. PIV systems, like EnviroVent’s Mr Venty® range work by drawing in fresh, filtered, clean air from the outside and gently ventilating the home from a central position, usually in the loft, above a landing in a house, or a central hallway in a flat or bungalow. They dilute moisture laden air, displacing it and replacing it to control humidity levels between 45 and 60 per cent, where condensation does not form.

For anyone looking for a ventilation solution just for the kitchen and bathroom, EnviroVent’s Cyclone Fan is an ideal solution. Cyclone fans control humidity levels in kitchens, bathrooms and utility rooms, using the lowest energy consumption.

Peter Haynes continues: “With the rising cost of energy bills, people are looking for ways to make their homes more energy efficient. Our Mr Venty® systems provide the best of both worlds, creating much better indoor air quality that in turn offers health benefits too. This system is particularly well suited to houses and flats that have condensation-dampness and mould growth issues.”

Positive Input Ventilation is ideal for retrofitting into existing homes and installation is quick and straightforward by an EnviroVent specialist, with no need for redecoration afterwards.

EnviroVent, which has its headquarters in Harrogate, North Yorkshire, has over 25 years’ experience in delivering sustainable products that are built to last the lifetime of a building.
The company’s products are engineered with high quality sustainable components to reduce maintenance and lifecycle costs.

For more information on energy efficient ways of improving the air quality within your home, please visit www.envirovent.com or call 0345 27 27 807.

28th May 2020
We use cookies to ensure that we give you the best experience on our website. Learn moreOk